As a festival addict, you have your favorite and unique things that you love about each festival that you go to. When it comes to Amphi, we love the combination of bands, nightlife and shops.

We started the festival with high expectations from bands and DJs and, as always, the pre-party madness. With heavy boots, we stomped to Dj Sven and Dj Graves From Aesthetic Perfection, quietly leaving to hear Steve Naghavi mixing in Club Luxor. The tunes were classics, mixed fade in/out as most local club enthusiasts prefer it. We prefer a little mix to our music but the selection was spot on with our former event setlist. And One hits, as well as some other appreciated songs from Project Pitchfork, Sisters of Mercy, Apoptygma Berzerk, Skinny Puppy, Front 242, etc.

With eyes weary and a late breakfast we arrived at the fest in the first day, just in time to see our favorite party starters:

[X]-RX – had “Kein Herz” in regards of the early our, the heat or our feet, and they ignited our festival spirit with “Gasoline and Fire”. “It was detected, virus infected” that they managed to make an enjoyable show with every occasion.  But this year, somehow, the sound wasn’t the best. Despite of that, their latest album resonated with our mood for party, with songs like “Riot” and “Code Red”, and elevated us to “Stage Two”.

When it comes to gothic rock bands the main stage is the place to find them at Amphi. UNZUCHT tracks “Ein Wort Fliegt Wie Ein Stein“ and their latest “Nur die halbe Wahrheit” brought energy to their fans for the 3rd year in a row.

As it is Never Enough to be a Dj, Daniel Graves appeared on the main stage with a little sore throat after a party night, but AESTHETIC PERFECTION overall was awesome with “Antibody”, “Ihuman” and our latest favorite song – “Lax”. A female live drummer that replaced Tim, made a really good impression and deserves all applauds for performing “Rhythm” + “Control perfectly”.

MONO INC‘s performance is something that every band needs to have. Martin Engler switched from voice to drums  and to guitar during their show, leading to a heartwarming reaction of the fans, that cheered and whistled to “The Symphony of Pain” “Welcome to hell”, “The Banks of Eden” and of course the much appreciated “Children of the dark”. He was also present at the after party on Orbit Stage on Saturday, proving once more his musical skills. We enjoyed again the very same “Children of the Dark”. A song in every goth setlist for many years to come. 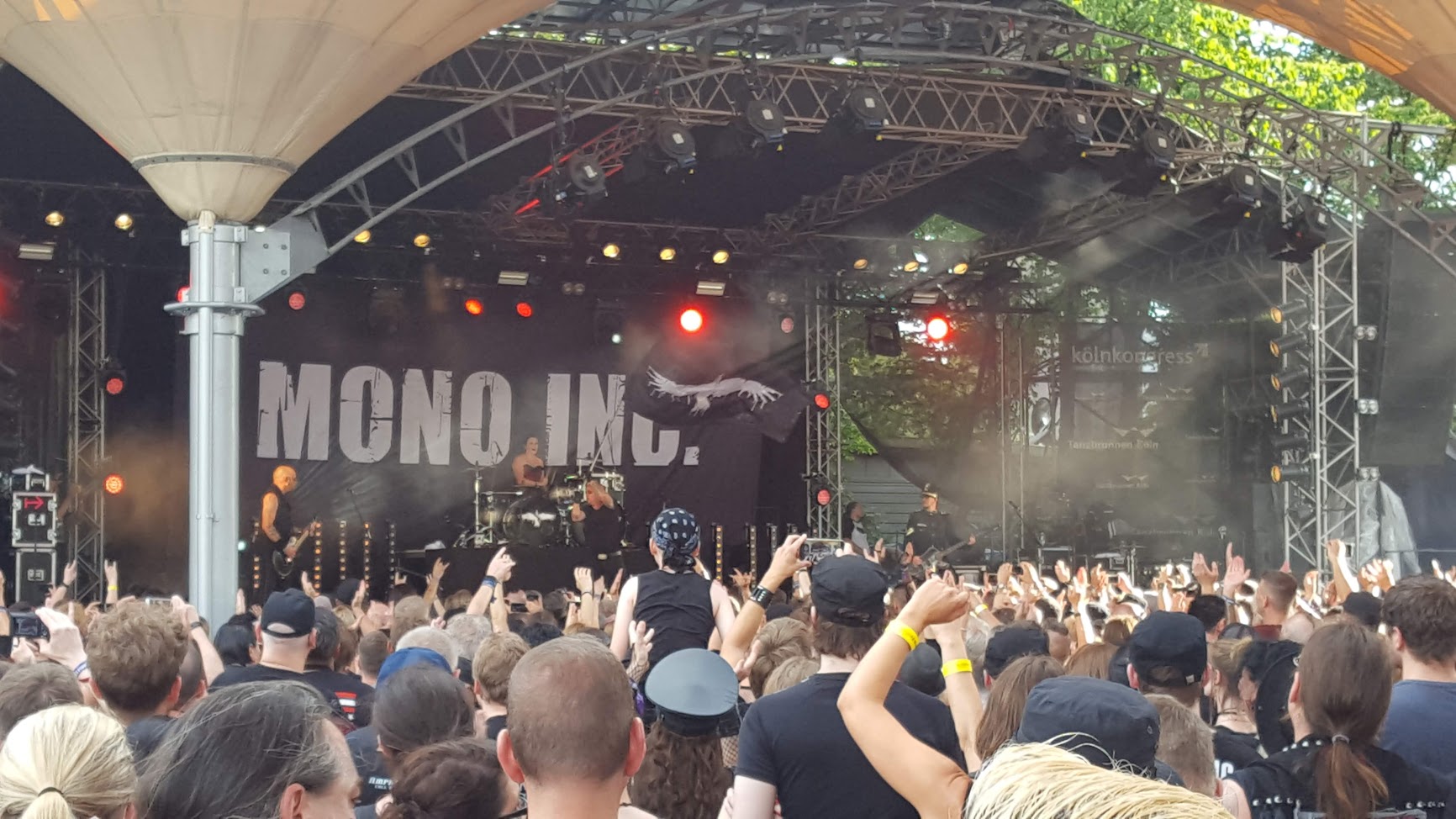 ASP raised all hands with “Denn ich bin der Meister” and made all dance with “Ich will brennen”. The power of this gothic metal band comes from the lyrics, violin tunes and stays in your heart for days. My favorite remained “Werben”.

She Past Away was the only one we got to see on the Orbit Stage this year and after 3 years, two new songs from an unreleased album were played. Their passion for post-punk is still there and it sounds better than ever before. This stage remains the best for experimental, creative and unique bands that offer new experiences each time. Volkan Caner and Doruk Öztürkcan remain an emblem for the future of Darkwave and Post-punk.

We were happy we weren’t kicked out from Orbit stage as soon as the concerts ended and we got to enjoy the lovely view of the Köln’s skyline that night, while also dancing on classic gothic songs at the after-party. Kudos for having an after-party on the boat!

The 2nd day was perfect, we were well rested and ready for a brave new day. “Work, sleep, repeat!”

HELDMASCHINE started the day for us. It’s perfect example of a NDH band that brings the raw industrial power to life into a performance. Water “served” from gasoline tanks, armor and good attention to detail on stage. The song“Sexschuss” reminded us of how addicted our world has become. The show culminated with “Himmelskörper” and a very pleased crowd.

SYNTH ATTACK was among the few bands that we managed to see at Theater Stage, just by arriving there early. Worth every minute! We loved the intro and the lights show that was only the tip of the iceberg compared to the rest of the show. “Life is a bitch”, “The Purge”, “Final Salvation”, all  with a harsh voice, synths and very well crafted distorted beats made all the fans burst into cyber dance. We especially enjoyed their cover of “Insomnia”, originally played by Faithless.

Neuroticfish is and will always be among our favorites to listen and see Live. Simplistic dress design and presentation, their song’s quality is the only thing that Sascha Klein focuses on. A huge surprise for us was announcing their new album ANTIDORON. Our skin shivered to his voice, that reached everyone while shaping all our neuroses, phobias and paranoias under the light of our self awareness, making us wonder whether is this “Music for a paranormal life”?

We wore our “bomb near our chests”, while wondering if you should “wake me up” , while pondering our “Behaviour” long after the show was over. However, the overall sound could have been better and although Christoph Assmann did his best, Hennig was missed.

All medieval Goths were ecstatic to see QNTAL. The opera voices and ritualistic songs brought us closer to ancient beliefs and myths and vibrations. “Die Finstere Nacht” and “Frühlingslied” faded in comparison to their new song “Nachtblume“ that entwines electro in a way like no other band could. The public reacted with awe and the future remains bright for this genre.

SOLAR FAKE brought souls  “Under control” like never before. Couples, friends and families were passionately singing  “All the things you say”, “Where are you” and “I don’t want you in here”. “Parasites” were the spark that made people join hands and “Observer” gave us all a rhythm to dance to. As a gift, the band covered “Papillon” from Editors. (A favorite from last year’s line-up)

AGONOIZE One of the most representative bands for the Aggrotech style, made a powerful impression this year at Amphi thanks to the costumes, acting and all in all, distinctive live performance. Although they weren’t allowed to bring fake blood on the stage, they still had an episode near the end of the show, when a guy dressed in a pink ballerina was splattering something similar to blood on the public.

We could notice they had a huge fanbase, by the high number of people wearing Agonoize merchandise and tattoos.

“Open the gates”, “Femme Fatale” and “Koprolalie” were the best from their set and their pure energy could have been felt even from the Met stand. “Glaubenskrieger sterben nicht”, so Agonoize rekindled the rebellious spirit in all of us.

We saw GRAUSAME TÖCHTER for the first time performing live, on the Orbit Stage in the 2nd day, and we must say, their show was something you won’t see every day. Their clothing or better say, their lack of clothing, the red flickering lights, the passion and their sketches conveyed us to a divergent dimension, where the feminine empowerment, rebellion and vengeance reigned supreme.

After the concert we rushed to the shuttle station, where we were really glad to find enough buses to pick up most of the fans heading out to the headliners.

AND ONE had an incredible show as always, although different. Absolutely everyone around us seemed to be really glad to be there as for a “Military Fashion Show”, “to every groove and every sound”. “Get you closer” was a lovely surprise to be heard live, considering that is such an old song. “Traumfrau” and “Unter meiner Uniform” gave us a nostalgic vibe, which didn’t last much because “two sounds are better than one!” and we did the “technoman”. “Krieger”, “Sometimes”, “High” accustomed everyone with this updated style of the band, in comparison with their outstandingly pounding old EBM songs. “Steine sind Steine” made all the hearts beat at unison. The show peaked with everyone’s “Shouts of Joy” and we celebrated “the sounds we’re searching for”.

Unfortunately, as all beautiful things have an ending, so did the concert. We went to the Theater stage while still whispering “Shouts of joy”. Since it was the only after-party still going, the area was quite crowded but we managed to have fun and dance till the end. We really appreciated DJ Emmanuel Pursuit, because he gracefully MIXED the songs, while enhancing the sounds with his effects. He was a very welcomed change, as all the DJs playing at the parties only faded out and faded in the songs.

In conclusion, our only regret was that the access to the Theater stage was restricted and we got to see only one band from the initial five (that were on our list). We believe that this issue could be solved by using the old Staatenhaus area. A better air conditioning system would be nice to have, as well as more affordable prices for drinks. We appreciated the number of toilets and of water fountains were supplemented. Although we were happy to find empty lockers, it was only temporary until we found out that every closing/opening would cost money. Perhaps it would be better to rent out the lockers for the whole festival.

Amphi 2018 was, as always, something we looked forward to, mainly thanks to the line-up, location and accessibility. We were humbled to see “Bine ati venit” on that panel near the main stage and we felt like home.

As we overheard someone saying while waiting in a queue “Die Welt ist klein und die schwarze Welt ist eben kleiner”, so it felt revitalizing to meet you all again and until next time, “We’re different, we’re the children of the dark”.